The Bugatti family is well known for the many members having been "in art", though usually only Carlo and Rembrandt are mentioned for art, and Ettore and Jean for the car-designs. Other family members keep very much in the shadows, like Roland Bugatti, younger brother of Jean, the oldest sister l'Ebé (mentioned because of the Bugatti biography which she wrote in the sixties) amd Lidia.

The Art of Bugatti exhibition in the Mullin museum in Oxnard, California, which started in March 2014, was practically the first show where Lidia Bugatti (also known as Lidia Bugatti de Boigne, as she was married to the count de Boigne) was recognised for her artwork presenting many paintings and drawings not shown before.

Apart from the many 2-dimensional works of art, there is at least one known 3D bronze sculpture of a horse, if there are more sculptures I do not know. The horse sculpture could be quite easily mistaken for the work of her uncle Rembrandt. Some animal drawings, of which the pencil drawing of a condor shown on the right (no date known, auctioned in 2013) is a nice example.

In this article I will show many of the known artworks by Lidia Bugatti together on one page, most phoographs taken at the Mullin museum. Because of reflections, photographs were mostly taken at an angle, and afterwards straightened again. 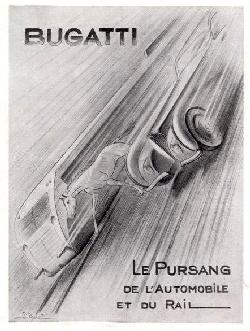 Left: Study for a Bugatti advert, pen, ink and watercolour, date unknown.
Right: Drawing of a Pur Sang horse, pencil on paper, date unknown. The drawing was given by Lidia to Bugattiste Uwe Hucke, who later gave it to Nigel Arnold-Foster. It has recently been for sale.
Note that both horses are in almost the exact same position.

Above many views of the Bronze horse sculpture by Lidia, including the signature, Reading Bugatti with the "L" incorporated in the "B". The date is 1935, the foundry stamp reads "Hébrard".

Two photographs of Lidia Bugatti, the left one at an early age, in a characteristic pose on a horse, the right one supposedly is also Lidia, now in the prototype Bugatti OTI, so this must be around 1959.
In the middle Lidia painted by her grandfather Carlo, here she is apparently older than in the first picture on the horse.