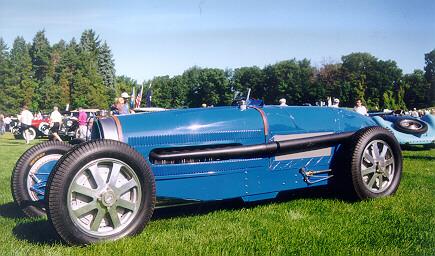 Additions to the compilation of all T54īs

I received this mail as a comment and addition to Andrea Meddaīs article in the last Bugatti revue about all T54īs. I decided to just present you with his entire comment:

Since the Webzine format should be no less accurate than Bugantics or our Pur Sang magazine, I would like to offer the following corrections and amendments to Andrea Medda's recent piece on T-54 Bugattis. Although I am without the benefit of my extensive files on the subject, I believe most of what follows will shed a little more light on the subject.

Chassis 54201 : Following the demise of Prince Lobkowitz at Avus, the 54 was rebuilt by Zdenek Pohl with a roadster body by a Czech coachbuilder. After many years of ownership, the car was acquired by the late British collector C.W.P. Hampton, who removed the roadster body and restored it as a road-equipped Grand Prix car. Upon Hampton's death, it was auctioned off with the rest of his Bugattis. Ownership since Hampton has been a trifle confused, perhaps intentionally, but it is believed to be owned today by Abba Kogan of Monaco. The Czech-built body ended up on a genuine, unused T-55 chassis frame with an early T-50 engine also numbered "1". A meticulous restoration (creation?) by the late Michael Giddins for Skip Berg created another version of "54201", but aside from the Czech body, there is no relation between the 2 cars.

Chassis 54202 : Information essentially correct, but it is worthy of note that the no.14 engine was a spare engine prepared for the Le Mans T- 50 effort of 1931. There are vague rumors that this car was buried in France as the German occupation spread and, subsequently, never recovered. Get out your metal detectors!

Chassis 54203 : The Kaye Don car, as it is best known, had a very colorful career that was recently described in a detailed piece by David Sewell in Pur Sang, Vol. 39, No. 1. Tiger-Two, as Don named it, has recently joined the collection of Formula One impresario, Bernie Ecclestone. The original engine from this car is with Ray Jones in the U.S. and will undoubledly emerge someday in a built-up car, perhaps the "Bachelier" replica roadster he has been working on now for about 12 years.

Chassis 54204 : Information given as written by Hugh Conway. Interestingly, the accompanying photograph of the T-54 heading Medda's article, is an assembled car using the no. 3 engine from this car. It is on a genuine T-54 chassis frame, but it's origins are unknown. It is frame no. 32 and superbly created or restored, depending on your viewpoint, by Ray Jones. Currently for sale with a subsequent owner.

Chassis 54205 : Again, essentially correct, but a nod should be given to the English craftsman, Bachelier, who built the roadster body. It came to the U.S. in the early 1950's, eventually ending up, where else, with Ray Jones! He "Jonesed" it, creating at least 2 versions of this T-54, one a G.P. and one a roadster. An ambitious investor group bought the 2 cars and other spares from Jones and recreated the "original" Bachelier roadster from the correct parts. 54205 today is actually in Holland with Louwman.

Chassis 54206 and 54207: as per Conway. Nothing to add, except the recent discovery by David Sewell that the chassis frame under the Kaye Don car today is stamped "54207". Sewell speculates, probably correctly, that when the Don car was returned to Molsheim for factory modifications, the Usines used the later "Birkin" frame, already carrying the later design.

Chassis 54208 : Again, as per Conway, but do not confuse this car with the T-59 with the same chassis number! The factory T-59 automobiles, many believe, carried T-54 serial numbers prior to their private sale. Some still carry faint "54" chassis numbers on their crankcases.

Chassis 54209 : The Czaykowski car, truly the best of the breed, however dubious the distinction! The no.8 engine, some believe, was recovered and reused by the Works in the T-59/50S 1935 ACF Benoist car best known for shedding it's bonnet and being caught by Robert Benoist. Retained by the Works, it was sold out the back door by Seyfried to his friend DeDobbeleer in the 4WD chassis. Later, Carlton Coolidge tried to restore the Seyfried assembly, without success. Eventually, he gave up and sold it to Ray Jones, who removed the engine and installed it in the unused 3 litre compound blower frame, appropriately modified, and "created" an almost perfect Benoist ACF 59/50S recreation. Still with Jones.

Chassis 54210, engne no.7 : The so-called "Varzi" car, this was sold by the Factory to U.S. enthusiast Dr. Sam Scher. Dropped on the dock accidentally by Le Havre stevedores from a considerable height, the car was returned to Molsheim to be repaired. Scher eventually got his car, but in it's first U.S. appearance at Bridgehampton, the gearbox, with an undetected crack from it's dockside drop, ran out of lubricant and was forced to retire as it got harder and harder to shift. Scher's driver, the estimable Bill Milliken, fitted a Buick Dynaflow torque converter, or transmission, and continued racing it with mixed success for several seasons. It, too, ended up with Ray Jones, who replaced the Dynaflow transmission with a correct T-54 unit. After nearly 25 years with Jones, it traveled through several hands; today it is with Tony Wang in the U.S.

Chassis 54211 : The chassis plate 54211 is correctly fitted today, as it always has been, to the T-51A known as the Veyron record car, today with Donald Koleman in the U.S. There never was a T-54 with this number.

Chassis 54212 : The chassis plate with this number, Molsheim stamping, is today part of the Bugatti Trust collection. It was given to the late Hugh Conway by Seyfried. At one point, it was fitted to the engine no. 5 T-59 (not 54), known today as 57248, also with U.S. collector, Tony Wang.

This just about sums it up. Again, this is all off the top of my head, so some minor inaccuracies may have crept in; for those, I apologise.

More on the T54 in an article by Andrea Medda on racing successes of the T54.